“Swimming pool” means relaxing in an environment that is generally desired to be peaceful. However, its water must be filtered and this filtration system inevitably generates noise; noise pollution for you and for your neighbours. Fortunately this can be reduced thanks to several solutions, especially if the pool is well designed from the outset.

Documentation often indicates the sound level of a device in decibels (dB) at 1 or 10 metres. However, this is acoustic pressure (the noise we hear and feel), much less than the acoustic power of the device (the noise emitted directly by a machine).

The indication of acoustic power is already mandatory for outdoor machines, according to the European Directive Noise emission by outdoor equipment, but not yet on pool equipment. Confusion between pressure and power therefore often occurs and it is not uncommon to be surprised by the actual noise of a machine after installation.

Finally, the decibels do not indicate the frequencies of sound emitted by the device. Low frequencies can be felt at long distances because they easily propagate in solids. They are stopped using elastic and heavy materials, such as loaded silicone or plasticized PVC masses.

High frequencies stop easily but are often more disturbing: they are stopped using dampening materials such as foam.

“Noise” is therefore a complex phenomenon. It is useful to understand at least its physics to then manage it as best as possible: without forgetting that the personal sensitivity of each person still plays a part in their perception. 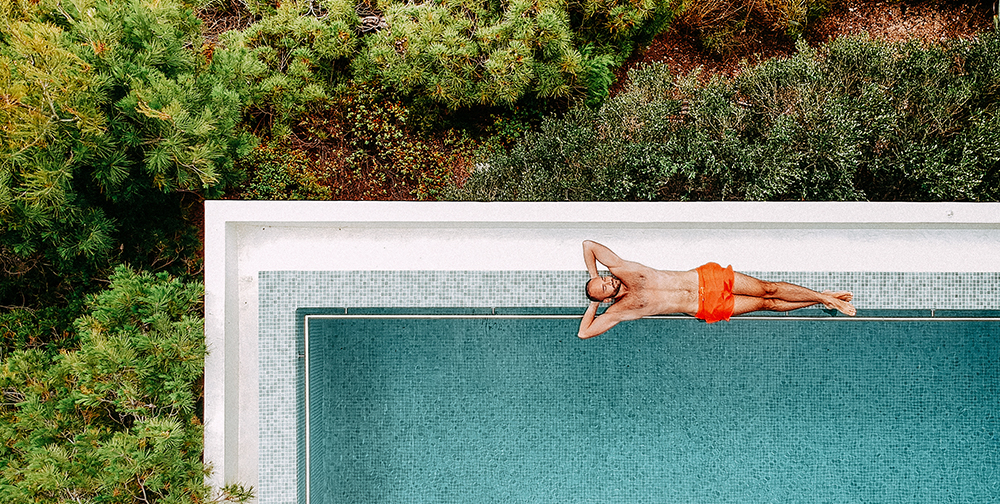 Where does pool noise pollution come from and how can it be remedied?

Apart from the splashes and screams of children jumping gleefully into the water, the noises coming from the pool are of several kinds:

To reduce noise pollution, you must first know the origin of it since it will not be treated in the same way.

Typically, there are two sources of noise in a pool: the pumps (filtration and heat) and the hydraulic circuit.

Solutions for noise produced by the filtration pump and heat pump

The filtration pump and heat pump (HP) are the two devices that inevitably generate acoustic disturbances in the pool environment: systematic precautions should therefore be taken to reduce them as much as possible.

Raising the pump to prevent it from being submerged in the event of a leak is common practice. However, it is necessary to avoid using a hollow support that behaves like a resonant box amplifying the noise of the pump. If you want to raise installations, you must do so using a solid support.

Use silent blocks or anti-vibration mats

Silent blocks are rubber pads to be installed under the device which prevent the transmission of vibrations and therefore low frequencies. These frequencies can be very unpleasant when the technical room is located in the basement of the house and then spreads throughout the house. An anti-vibration mat, similar to those placed under washing machines, may also produce this absorbent effect.

While the removal of hollow supports and the insulation of the pump from the ground are inexpensive and practical solutions, the best solution for reducing noise pollution is still the installation of a variable speed pump, particularly when the devices are located close to sensitive places (in a garage located under a bedroom for example).

As explained in our article on variable speed pumps, they regulate their speed according to the pool’s filtration need. At night in particular, they therefore emit almost no noise when turning at low speed since no one is bathing.

It is important to mention that installing an insulating box around the filter pump is a bad idea! The motor of the device must be able to cool: with an insulating box, it will frequently overheat, which can greatly reduce its lifetime.

Install the heat pump in the right place

A heat pump needs as much space as possible around it, since it uses the calories of the ambient air to heat the water in the pool, then releases this air “emptied” of its calories and therefore cold.

The management of the noise produced by this process depends mainly on the manufacturer of the HP, which can place sound insulation on each panel of the box or insulate the compressor with a “cap”.

As in the case of the filtration pump, insulation of the heat pump in a box should be avoided. What’s more, the device also needs as much air as possible to produce its heating effect! A box would only retain the cold air expelled, which is totally useless for the proper operation of the heat pump.

In addition, the place where the pump is installed has a real impact on the noise pollution produced. To minimise resonances, it is necessary, for example, to avoid installing it too close to a wall, in a corner or overlooked by a roof. Ideally, the heat pump is placed 1 metre from the wall, surrounded by plants that will effectively absorb high frequencies.

It is also wise not to face the front of the pump which produces noise and discharges cold air towards the pool.

Finally, a heat pump is frequently installed on a concrete slab: here too, you must remember to mount it on silent blocks to avoid the propagation of vibrations in the garden and home.

Like the variable speed filtration pump, the Full Inverter heat pump varies the frequency of the electrical current it receives to rotate its compressor and fan at different speeds and regulate its power according to the water temperature.

And when speed is reduced, the sound is reduced of course, especially at night thanks to the programmable night mode of the Full Inverter pumps. The device then becomes very silent so as not to cause any disturbance.

Solutions for noise produced by the hydraulic system

Finally, pipes can also be noisy if they have been poorly sized. Too much pressure drop at suction, too small a diameter of pipes and too tight elbows can generate a cavitation phenomenon, which produces an extremely noisy characteristic rattle (microbubbles that implode when they arrive under pressure).

This phenomenon can also occur after the pump, in filter valves where there is a lot of change of direction: if the water circulates there too fast, it will also produce cavitation.

Unfortunately in these cases, the only real solution is to rebuild the hydraulic circuit. Because the design stage is the most important to ensure the proper functioning of a pool, making sure to maintain the right passage speeds (especially at suction, ideally 1.5 m/s) to minimise hydraulic noise.

How to reduce the noise pollution of your pool - a summary

To reduce the noise generated by the pool facilities as much as possible, attention must be paid to the design stage. For example, we would be tempted to place the technical room as far away as possible from the pool so as not to hear the machines: too long a distance will nevertheless increase the possibility of cavitation, resulting in a very loud noise that is even more disturbing.

Everything is therefore a question of balance: a properly sized hydraulic network, distances measured to respect water flow rates and avoid pressure drops, as well as devices installed on silent blocks and surrounded if possible by plants will be the best guarantee for a pool that is as silent as possible.

Hello, I have a question…

I have a question concerning noise coming from the filter close to the neighbors. What kind of wall can I build to reduce the noice in my yard?

Hello Teresa, Thank you for…

Thank you for your question but I'm afraid we're not the best to answer your questions. I'd recommend that you contact a mason or any other professionals / technicians that will give you the best advice and will also make sure that the wall you build not only reduces the noise of your neighbor's filter but also ensures that your wall will match your country's regulations.

The variable-speed pump: the essential component of a smart and sustainable pool

The variable-speed pump, or VS pump, first appeared on the market some fifteen years ago and its use has become progressively widespread amongst swimming pool owners. Read more
Read