LED pool lighting: 5 things to know to help you make the right choice

Almost nothing beats an evening spent next to an illuminated pool. With good friends, good food and drink, and a quick dip at midnight as the icing on the cake: paradise!

Not long ago, pool lighting often involved one large spotlight, installed in the terrace side of the pool wall.

But to our delight, things have certainly changed. LED spotlights now make the lighting much prettier, with more reliable equipment and much lower energy consumption!

An illuminated pool looks beautiful at night. But it’s also extremely practical when bathing: dark water quickly loses its charm and is all too reminiscent of the film ‘Jaws’.

But did you know that pool lighting is also very useful in terms of security?

Imagine hearing a loud splash in the middle of the night. You’d want to know immediately what was going on in your pool. Your first instinct: switch on the lights (some systems light up fully during the first few seconds for this very reason). So you can see exactly what has fallen into the water.

In most cases it’s an animal. But if it were a child, imagine what it would be like without lighting... In short, lighting up your pool can be extremely useful. 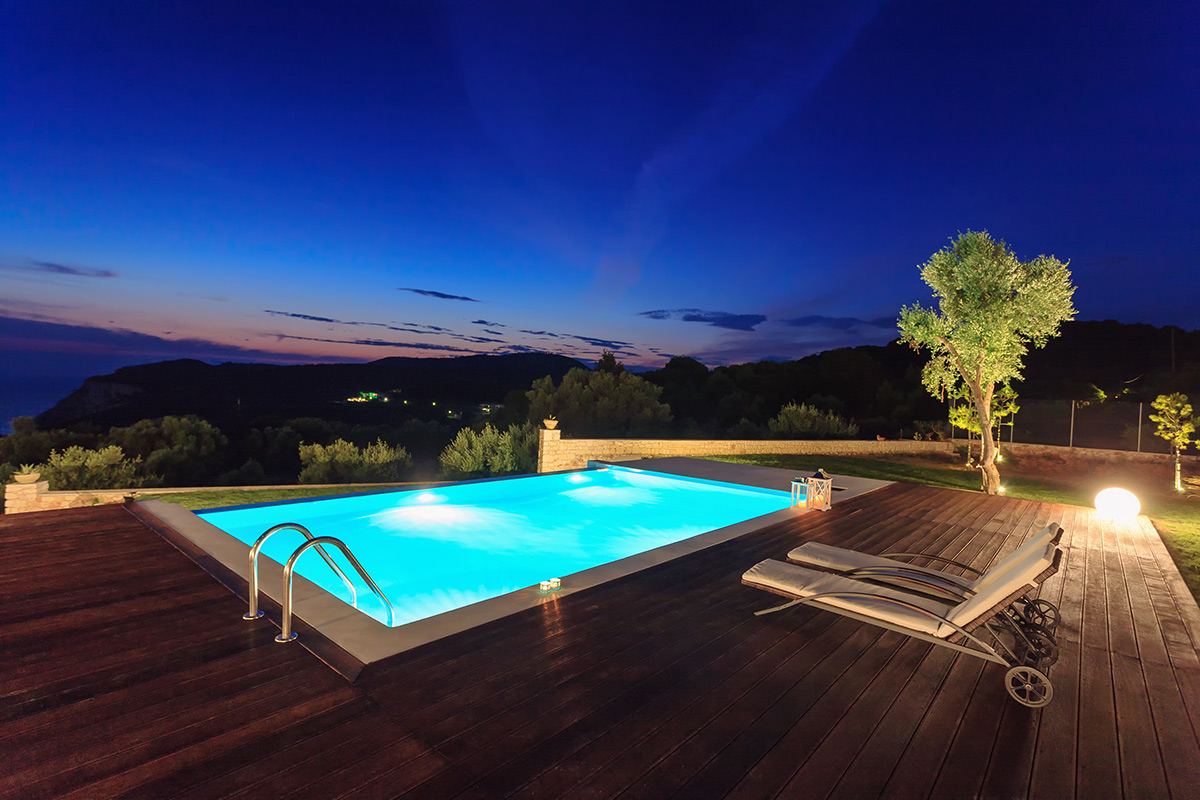 Historically, pool lighting was generally provided by large PAR56 light bulbs: a standard from the world of the performing arts, powerful but power hungry (300 W) compared to current standards.

These incandescent light bulbs certainly weren’t expensive to buy, but their very low voltage operation (due to safety concerns in the water) required large and expensive copper wires to avoid overheating (not to mention the cost of the transformer, also in copper).

Since then, the European Union has implemented its Directive on Eco-design for energy-using appliances, which requires manufacturers to use more wholesome elements that consume less.

This Directive also impacted the pool world, which has gradually been adopting LED lighting as its new standard. For example, a recent LED spotlight such as our Microbrite consumes only 12 W, that’s 25 times less electricity! 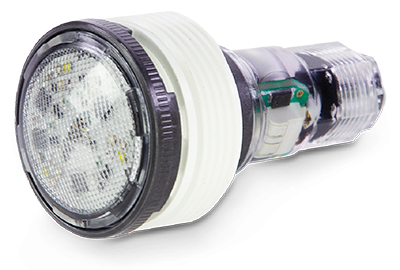 The biggest advantage of LED (which stands for Light-Emitting Diode) is that it converts most of the energy that it consumes into light. By comparison, incandescent light bulbs convert a lot of their energy into heat, which reduces the life of the light bulb. LEDs, therefore, if properly cooled, offer a very long life. But everything depends on the space available.

To keep the PAR56 shape in pools and to avoid having to change all of the installations, the first light bulbs manufactured were the same shape, but the filament had been replaced with hundreds of LEDs. These offer low light intensity, however, and are cheap but not powerful: the PAR56 is not optimised for LEDs, particularly in terms of heat release.

Another variant of LED lighting retains the diameter of the PAR56 spotlight, but with a different bulb shape: the intensity of the 3 or 400 LEDs required remains low, however.

Some more modern spotlights, although they still have the PAR56 diameter, use no more than a dozen LEDs of very high intensity, like the Intellibrite from Pentair. This is the solution that should be favoured. 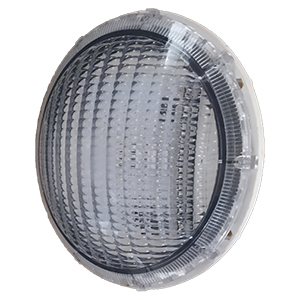 There are still smaller spotlights like the Microbrite: installed in an arrangement of 5 or 6 these can be used as the main lighting source and reduce shadows in the pool, making it seem more welcoming. Their reduced size also means that they can be installed in places that other spotlights would not fit, such as alongside steps.

Note that LEDs have a very long life (often more than 10,000 hours). Although they sometimes cost much more than other types of light bulbs, they quickly pay for themselves.

It also makes it possible to create attractive designs as you will see now!

When you hear the word LED, you no doubt think of the amazing spectacles that these diodes are able to produce thanks to their countless colours. However, those are generally only seen in the air, not in the water.

Water is not neutral and absorbs more or less of the wave length depending on the colour. For example, it is rare to find a pool illuminated red, as water absorbs much more of this colour than it does blue or green. The result would be very murky and not pleasant, as you can imagine.

That said, it is still possible to produce pretty effects in the water, and this is one of the great benefits of LED over incandescent bulbs.

Basically, LEDs emit RGB (red, green, blue) and mix these three colours to achieve the desired result. Other more modern versions emit RGBW (RGB plus white), offering the possibility to emit true white, which is much cleaner than a mix of colours.

The colour rendition is carried out either by LEDs in which a fixed colour is mixed with other fixed colour diodes, or by LEDs which have the ability to change colour. This second variant can be used to achieve cleaner results as the colours are better mixed. Try to choose that solution!

5. What about lumens and stuff?

You know about lumens, which are the unit of measurement for light output, and which has become an everyday word since the accessibility of LED lighting. But like colours, although it’s an effective and constant form of measurement in air, this is much less so in water as it absorbs the light.

The lumens you see mentioned on the light bulb in your lounge cannot be literally transposed into a liquid environment.

In reality, you need to take greater note of the ratio between electricity consumption and reported luminosity: because when we talk about bulb or diode, the aim is always to convert a maximum amount of energy into light rather than heat. 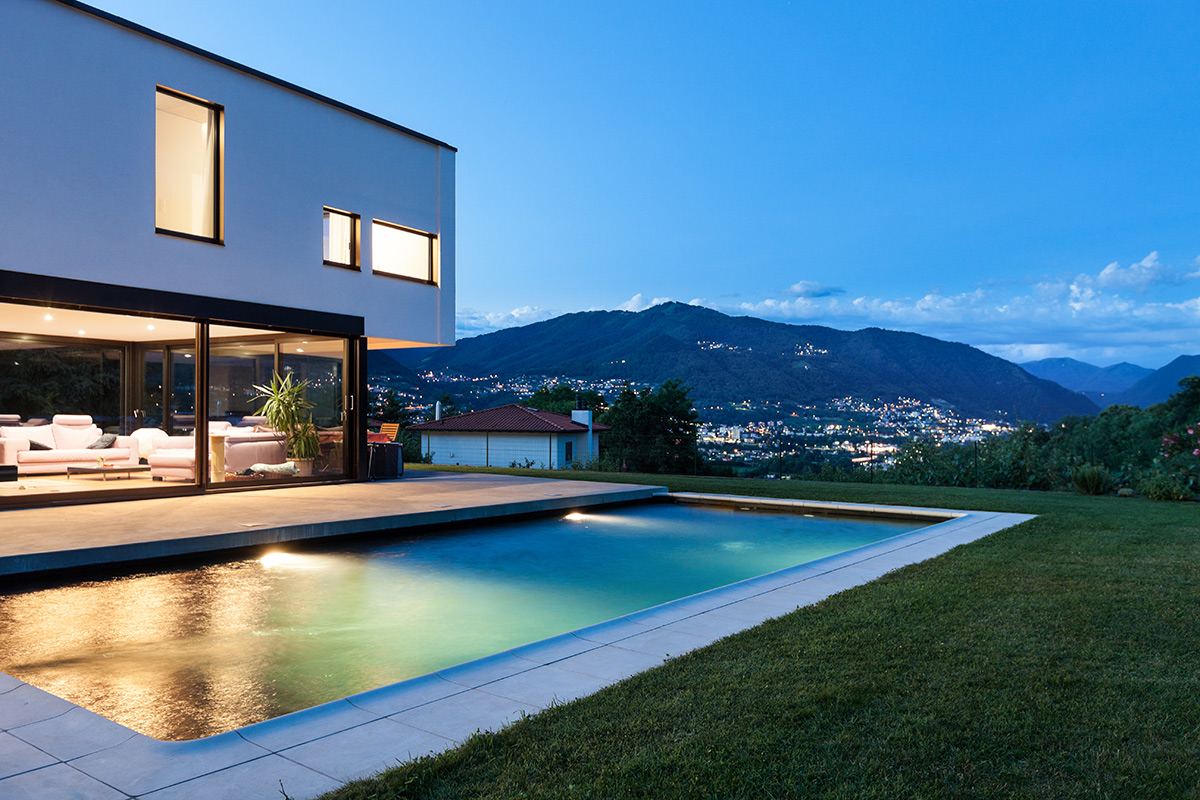 LED spotlights: the ideal modern solution for your pool

When choosing your LED spotlights, pay attention to the following details:

- Do you want low or high intensity LED?
- What is the consumption compared to reported lumens?

As you’ve seen, the light is never the same in water as it is in air, and the lumens value alone is not necessarily what counts.

So now you’re fully prepared to enjoy the cosy atmosphere of your pool at night or an explosion of colour! Enjoy!

Make your pool sparkle with colour with lights from Pentair